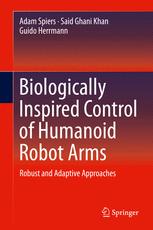 This book investigates a biologically inspired method of robot arm control, developed with the objective of synthesising human-like motion dynamically, using nonlinear, robust and adaptive control techniques in practical robot systems. The control method caters to a rising interest in humanoid robots and the need for appropriate control schemes to match these systems. Unlike the classic kinematic schemes used in industrial manipulators, the dynamic approaches proposed here promote human-like motion with better exploitation of the robot’s physical structure. This also benefits human-robot interaction.The control schemes proposed in this book are inspired by a wealth of human-motion literature that indicates the drivers of motion to be dynamic, model-based and optimal. Such considerations lend themselves nicely to achievement via nonlinear control techniques without the necessity for extensive and complex biological models.The operational-space method of robot control forms the basis of many of the techniques investigated in this book. The method includes attractive features such as the decoupling of motion into task and posture components. Various developments are made in each of these elements. Simple cost functions inspired by biomechanical “effort” and “discomfort” generate realistic posture motion. Sliding-mode techniques overcome robustness shortcomings for practical implementation. Arm compliance is achieved via a method of model-free adaptive control that also deals with actuator saturation via anti-windup compensation. A neural-network-centered learning-by-observation scheme generates new task motions, based on motion-capture data recorded from human volunteers. In other parts of the book, motion capture is used to test theories of human movement. All developed controllers are applied to the reaching motion of a humanoid robot arm and are demonstrated to be practically realisable.This book is designed to be of interest to those wishing to achieve dynamics-based human-like robot-arm motion in academic research, advanced study or certain industrial environments. The book provides motivations, extensive reviews, research results and detailed explanations. It is not only suited to practising control engineers, but also applicable for general roboticists who wish to develop control systems expertise in this area.